Helping the animals that help us

Where do we get our tasty cheese, warm socks, and sizzling sausages? 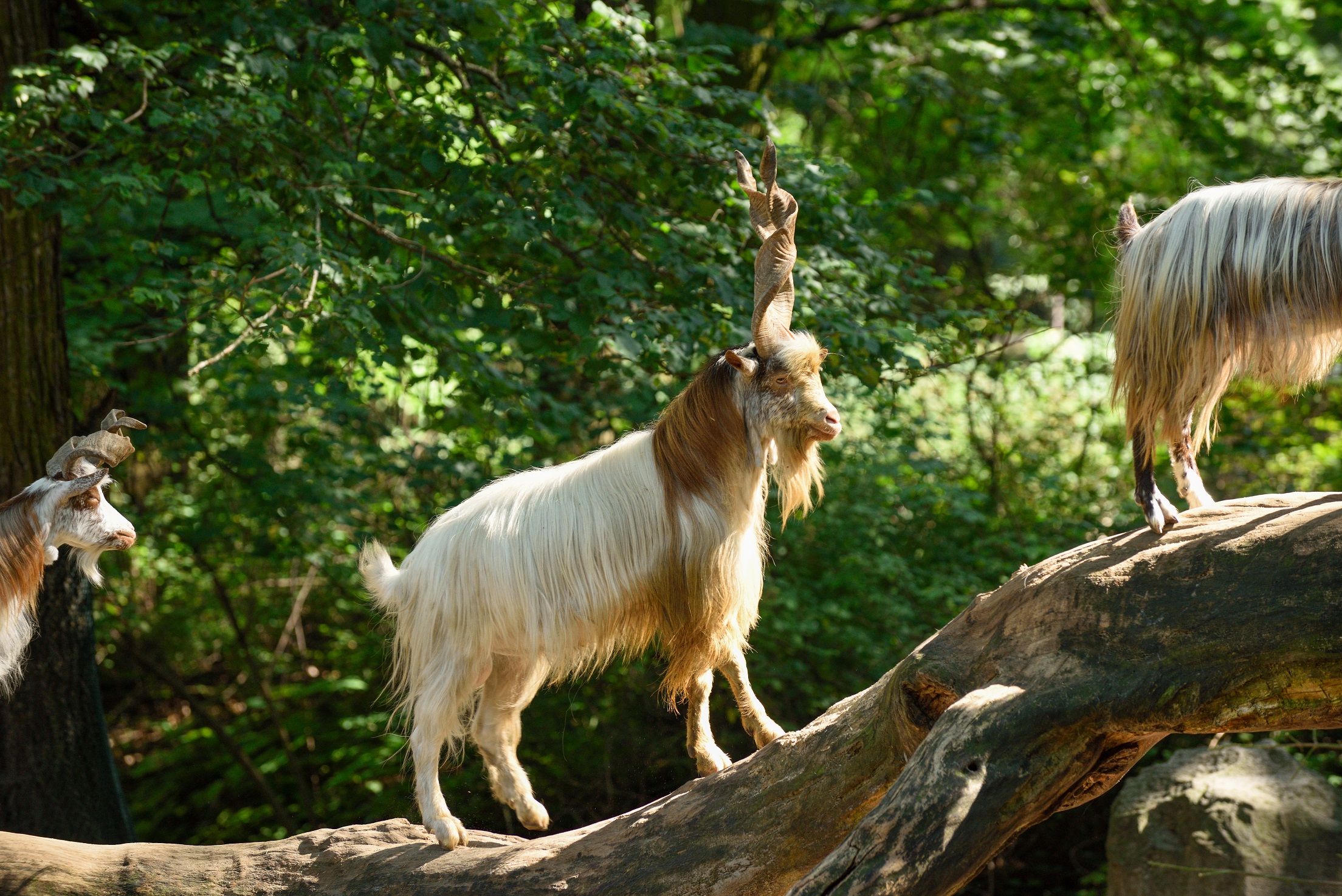 While some animals are treated to a lovingly prepared dinner every day, others end up on the menu themselves. The long and complex relationship between humans and animals is full of contradictions – some are seen as housemates, comforting companions, or even family members, while others are primarily regarded as a source of food and clothing or as a means of transportation. These attitudes vary depending on where you are in the world, but also on the particular species. In the West, for example, cattle are slaughtered to make burgers while dogs receive knitted jumpers in the winter – in India or China, it could feasibly be the other way around.

A world populated by livestock

About two-thirds of all mammals on our five continents are domesticated animals; wild animals account for only four percent of Earth’s mammals. Livestock therefore represent an important group of animals that deserve more attention than they get. Given that relatively few of us grow up in a rural environment where shearing sheep, milking cows, and sending animals to the slaughter are part of everyday life, most people only gain first-hand experience of these important animals at the zoo. Tierpark Berlin is home to a variety of livestock breeds – some of which are now very rare. These animals can be found in and around the petting zoo.

Tierpark curator Dr Florian Sicks is responsible for many of the park’s inhabitants, including the sheep and goats at the petting zoo. Here, visitors of all ages can not only see, hear and smell the animals – they also get to stroke and groom them. Dr Sicks is committed to ensuring that old livestock breeds are not forgotten. In this interview, he explains what is so special about these farm animals and why they, too, are in need of our protection.

Dr Sicks, let’s start with the basics: can you tell us what exactly is meant by the term “livestock”?

“Livestock” refers to all animals that are of direct use to humans and provide economic benefits. This includes managed wild animal populations such as red deer and trout, as well as domestic animals like cats and cattle. Our present-day domestic animals are all descendants of wild species. Although the domestication process was different for every species, the outcome was always the same: a few individual animals ended up in the hands of humans and were gradually bred to better meet our requirements. Sought-after characteristics included, for example, less aggressive dogs, or cows that produced greater quantities of milk.
Today’s domestic sheep is descended from the wild mouflon species (Ovis orientalis), which was first domesticated around 10,000 years ago. Over the course of thousands of years, these animals have become so far removed genetically from their original ancestors that they are now considered their own breeds. The Food and Agriculture Organization currently counts 7,616 different livestock breeds, which can be traced back to 40 original wild species. The reason why several breeds sometimes resulted from a single wild species is because one species of sheep, for example, was adapted to different geographical and climatic conditions around the world. They were also bred with different priorities depending on the desired produce (wool, milk, meat, etc.). Today, however, 20 percent of livestock breeds are threatened with extinction.


Why are so many species of livestock now so rare?

The industrialisation of agriculture has also changed expectations of animal “yield”. With machines making it possible to produce greater quantities of grain and sugar, there is also now a higher demand for animal species that can produce more milk, more eggs, and more meat. Formerly, livestock were bred to have a wide variety of different characteristics. For example, farmers might have prioritised a long life expectancy, robustness against the weather, frugality with food, or good maternal instincts. In contrast, the modern “high-yield” breeds are often bred for a single characteristic – such as high milk production. Economically, old breeds just cannot compete with these new breeds within the currently prevalent system of intensive farming. Therefore, most farmers today favour just a few, high-performance breeds.

Why is it important to preserve these older breeds?

There are many reasons why it is important to maintain a wide variety of livestock breeds. With their broad genetic diversity, old breeds can serve as a good basis for new breeding initiatives. This could be useful if we witness a change in consumer demand or in housing or environmental conditions that bring other characteristics such as longevity and robustness back to the fore. The loss of any livestock breed also represents a loss of certain genetic characteristics that have been laboriously developed over generations. We can also assume that older livestock breeds are more suitable for organic farming. Many modern species can no longer be kept free range all year round and are unable to cope with more natural feeding conditions. As many “old” characteristics have been neglected in modern-day breeding practices, our contemporary breeds are significantly more susceptible to disease and stress than their early ancestors.

But doesn’t organic agriculture account for only a very small, niche market?

Organic produce is very popular. The number of organic farmers is on the up, and the area of land used for organic cultivation has increased by about 20 percent in the last five years. Today, more people than ever before recognise the benefits that organic farming has for the environment and its biodiversity in comparison to conventional farming. Its carbon emissions are lower and thus protect the climate, and it avoids monocultures, ensuring the preservation of smaller biotopes. Also, far more animal and plant species can live on organically cultivated land thanks to stricter rules on the use of fertilisers and pesticides. Furthermore, organic farming is preferable from an animal welfare perspective, as having robust breeds roaming freely constitutes a much more natural and dignified life for the animals. The latter argument is actually the most important for many consumers, who are becoming increasingly aware of the conditions under which our food is produced. They don’t only want to eat more healthily, they also want the animals to have a decent quality of life. This growing awareness is likely to be reflected in consumer decisions in the long term.

As organic farming is better for the planet’s biodiversity in general, one of our species conservation tips is to reduce meat consumption and focus on quality rather than quantity. But what can a zoo do to preserve endangered livestock breeds?

On the one hand, we can contribute to the preservation of these animals by keeping and breeding a variety of old breeds. Tierpark Berlin is home to many of the livestock that appear on Germany’s “Red List of endangered livestock breeds”, including the spotted Alpine sheep, Skudde sheep, Rouge du Roussillon sheep, Thuringian goat, Girgentana goat, Fjäll cattle, Mangalica pig, and the Cröllwitzer turkey.
Zoos also always have an educational role to play. When it comes to teaching about livestock, the first and most important step in these times of fast food and discount clothing chains is to show people where our food and clothes actually come from. Once every year we shear our sheep – which is something very few children have ever witnessed. Even feeding our predators with chicks is something that helps to bring a bit of reality back into our lives, which are now so far removed from natural processes. It is probably exactly the same type of chicken that is found in chicken nuggets, but industrial processing makes it easy to forget that our meat does not grow on trees. Our two Girgentana goats Max and Moritz draw attention to another use for livestock besides food and clothing: every Wednesday, they pull our little goat carriage around the petting zoo, helping the keepers deliver food to the other animals. Max and Moritz therefore remind visitors that many animals, including cattle, horses and donkeys, were once – and in some parts of the world still are – used as pack animals for transporting people and goods.

But can the Tierpark protect rare livestock breeds from extinction simply by raising awareness?

The long-term survival of old livestock breeds can only be ensured if people find a large-scale use for these animals again. Tierpark Berlin demonstrates ways to achieve this not only in theory but also in practice, providing concrete examples of how these breeds can be preserved through use. We support projects that are trying to implement an economic model using endangered breeds, as such initiatives take a while to become financially viable. For example, we are supplying a landscape conservation project in the Leipzig area with offspring from our spotted Alpine and Skudde breeds. There, our sheep are helping to build up wood pastures in a former open-cast mining area, where nothing grew 20 years ago. In 2013, this successful project was awarded the Saxon Environmental Prize. We also provide a young Berlin hatmaker with wool from our Rouge du Roussillon sheep. Her hat collection made from Rouge du Roussillon wool is making a valuable contribution to the preservation of the rare breed. Her hats are sold all around the world and have even featured at Berlin Fashion Week, in the Chinese edition of Elle, and the Italian edition of Vogue. She was also given some of our young sheep, which she bred herself. She now has the largest Rouge du Roussillon herd outside France and uses their wool to make her collections. And the beekeeper who looks after the bees in our show hive also maintains other beehives on our premises. He sells the honey produced by these hives at local markets.

It’s nice to hear that there are also people outside of zoos who are committed to the conservation of rare farm animals. But can a handful of enthusiasts in Germany save these breeds from extinction in the long term?

Of course, raising awareness of the threat and listing a few examples is not enough on its own. The only realistic, sustainable and long-term way to save these animals from extinction is to give them back their former role – they must perform the task for which they were domesticated. And this is where consumers come back into play.
We need to pay attention to where our meat, eggs and clothing come from and rethink our consumption habits. In recent decades, meat consumption per capita has doubled. We often forget that meat is already a kind of “processed food”, as chickens, pigs and cows are fed with corn, soy or wheat so that they gain plenty of bulk. To create the fields to grow this animal feed, forests are cleared and wild animal habitats are destroyed. In addition to the good basic tip to eat regionally and seasonally, the motto that should apply to everything we consume is: “Less is more”.
Farmers can only keep old domestic animal breeds on smaller, ecologically managed farms, thereby preserving a centuries-old cultural asset for future generations, if it is economically worthwhile for them to do so.

Thank you for the interesting chat. We very much hope that you and Tierpark Berlin will find many more supporters in your fight to preserve this endangered diversity!